Edwin Loyal Larkin was born on Christmas Day, in 1867. When he was a young lad of 16 he attended a local event, the Tunbridge Ball. From that time on he loved dancing. In the book "And Everyone Would Sashay" compiled by Ruth Sher she describes the District School #3 where after the lunch boxes were put away at noon, sixteen of the older pupils danced the old dances. Ed played harmonica for those noontime school dances. But he wanted to dance himself! By the time he was 21 he was fiddling and calling the dances at kitchen parties all over the area.


After dancing for many years, the group officially formed in 1934. That year the Ed Larkin Contra Dancers performed in front of the log cabin on Antique Hill at the Tunbridge Fair. They went on to appear at the 1940 New York World's Fair. 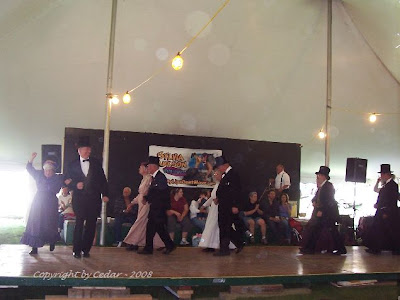 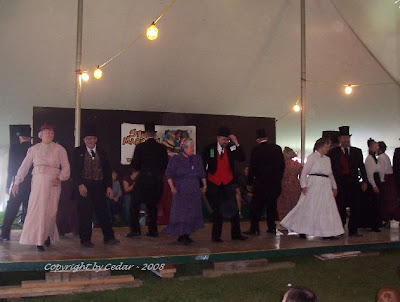 The group performs such old time dances as "Hull's Victory", "Portland Fancy", "Petronella", and "Green Mountain Volunteers" among others. The following video was taken this past Saturday. I will bet that before it's finished your toes will be tapping!

This gentleman will be 90 years old in a few weeks. He was the fiddler for Saturday's performance and still fiddles regularly for the group. 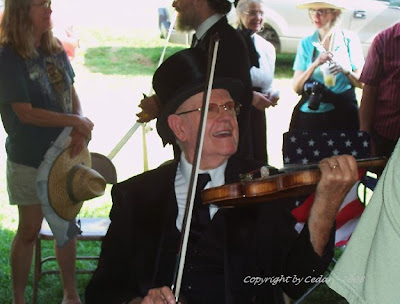 And now the performance is over and the dancers parade off the dance floor, waving goodbye in Tunbridge for another year! 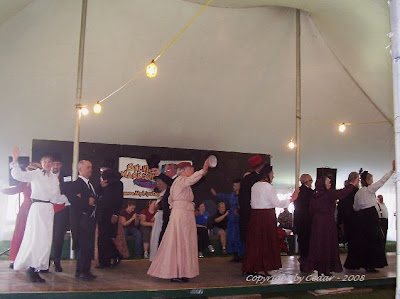 If you want to visit the Tunbridge World's Fair check the website http://www.tunbridgefair.com/ as summer draws to an end. The fair is always held in early September. While on the grounds don't miss the Ed Larkin Contra Dancers performing in the tent on Antique Hill. You can still obtain a copy of Ruth Sher's book there. Also if you check out the exhibits in the Floral Hall on the fairgrounds, you may still be able to find copies of the book "History of the Tunbridge World's Fair" by Carol Moller.

See you there next September?

What a great job... you are right... toes were a tappin'... ready to sashay the floor...they are such a remarkable group!

What a wonderful way to end your reports on the Fair!!
I just adore the dancers in the attire! The little video snippet you included was delightful and they do look like they are having so much fun up there!
Amazing the gentleman is 90 years old and still going strong on the fiddle. Good for him!
Great post!

Thank you for your compliments! I thought the little video would be something you would enjoy! I've seen them perform for at least 30 years, it's always sad to see some of the older ones not there every few years, but there are younger folks joining the fun.

Very nice! I enjoyed the video! I sure hope that tradition and the passion for it will be passed on so that it can continue!