Inez Milholland was born August 6, 1886 in Brooklyn, NY. The family owned property in the eastern foothills of the Adirondacks and summered there, at "Meadowmount".... That home is now a summer camp for music students, with alumni including Yo-Yo Ma and Itzhak Perlman.

Inez attended Vassar College, graduating in 1909. While there she was a strong worker protesting the fact that women were not yet allowed to vote. She went on to become a well known leader and public speaker in the women's suffrage movement.

Here Inez is riding in a parade in 1912 in New York City. The photo was made into a post card. 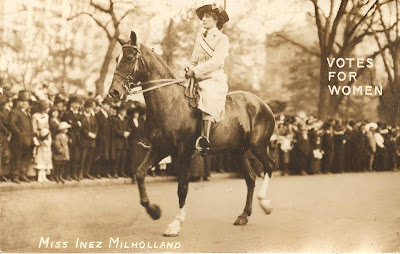 On the back of this postcard is a note from Inez's sister Vida to my grandmother. I'm sure there was a wonderful story about listening to a radio, but I do not know what it was. 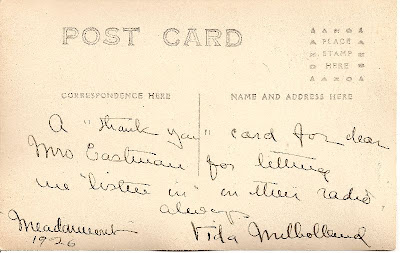 Here is Vida on the left with her famous sister, Inez. 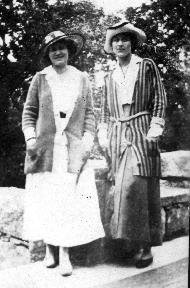 In 1913, on the day before Woodrow Wilson's innauguration, Inez led a suffrage parade in Washington, D.C. 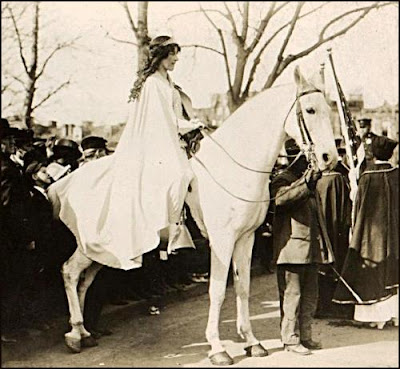 This is the poster for the National Women's Party, featuring an artist's rendition of Inez in that parade in Washington. 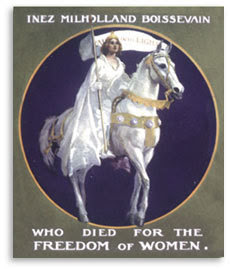 Inez married that year, becoming the bride of Eugen Boissevain. Three years later in 1916 Inez died at the age of 30 while on a speaking tour in California. Several years later Mr. Boissevain married Edna St.Vincent Millay.
To a "north country" neighbor, many thanks to you Inez, for your hard work so many years ago in bringing the vote to women!

What a wonderful story, Cedar, with awesome pictures to go along with it! Women like Inez are such an inspiration for women in every age of history. Thank you so much for sharing!

Wonderful post!!! Brought tears to my eyes...what an inspiration she was. We have so much to thank her for.

Neat Cedar.... I enjoy reading about history especially when it effects one personally. I can't believe that your grandmother knew Inez's sister.

Inez Milholland was a special woman --who stood up for women, at a time when not many would!!!!

Those old time photos are the best, and yes the story they tell, not just a history, but wrapped into a personal history.

Cheers for Inez ... from a fellow Brooklyn resident! In fact, I'm going to see if I can dig up anything fun for you about the family - the old Brooklyn Eagle newspaper archive from the 1900s are available.

And she rode an AWESOME horse!

What a great story and you have the nice photos to go with it. thanks. MB

Hello……
This is amazing!! I am so glad to found your blog!

I love all the photos and history you wove together - and how wonderful that there was a connection to your grandmother!

Wonderful story and photographs. I do feel inspired by those women who paved the way for us.