Springtime in the northeast brings maple sugaring time. Here in the Adirondacks there are several maple sugar "works"... Stands of maple trees which are tapped for the sap. Sap is either collected in buckets on the side of the trees or runs directly through vinyl pipeline from tree to tree, ending up in a holding tank. All parts of the system are sanitized prior to production. The sap is then boiled down to make maple syrup. This is our family's sugarhouse. It has been in use for many generations. 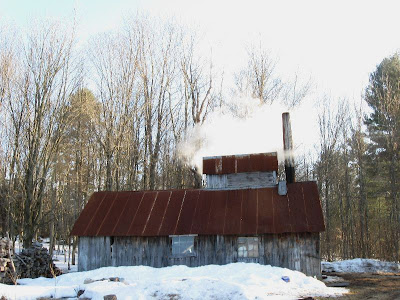 You can see that that our family has held to the traditional ways, no fancy building here! It is treasured as it is, and I'll show you why. 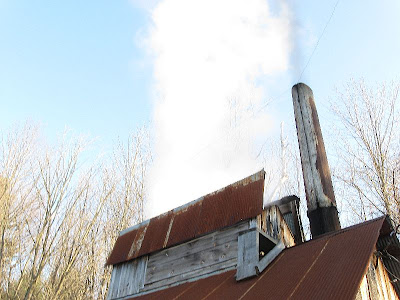 On the interior wall you see initials of my son's great-grandfather,... dated 1918! There are other notations on the walls that are farther ago than that, but those did not photograph well. 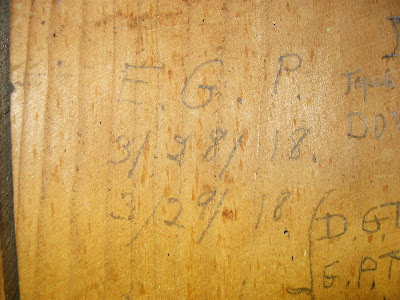 This is looking up from the boiling pans to the opening above where the steam rolls skyward. 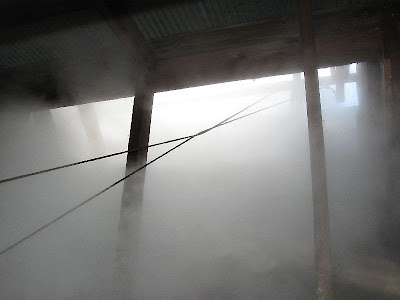 My son is adding wood to the fire beneath the boiling pans. Some modern operations have oil-fired boilers, all encased in stainless steel and in well finished rooms. For us, the old way, while perhaps a lot more work, is interesting. We have had school classes visit to watch this traditional process. 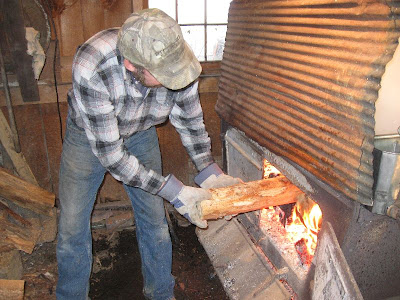 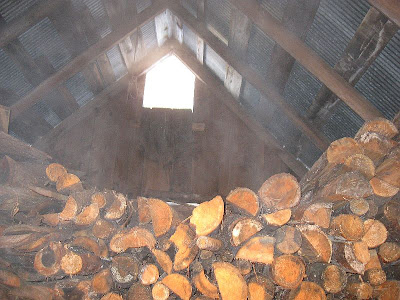 The back half of the sugar house is where the wood is piled. By the end of the boiling season most of this will be gone. Used to feed the fire that boiled the sap. In the photo below you see the steam rising from the pans of boiling sap. Strainers rest across the pan's upright walls, waiting to skim any froth from the top of the sap. 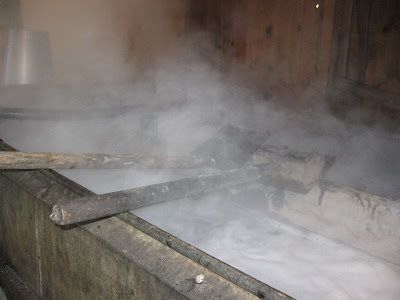 The sap enters in one end of the system of connected pans, and as it thickens toward syrup consistency it moves forward to the final pan where it is drawn off. Here my daughter-in-law brings more sap gathered from buckets on the trees. My grandsons watch. The sap is a clear liquid almost like water, but with a sweet taste.

According to studies, it takes four trees at least 40 years old to yield enough sap over six weeks to produce one gallon of maple syrup. It takes 40 gallons of sap to boil down to one gallon of syrup. I will have more photos and show how the syrup is tested for correct consistency, then strained into the plastic jugs, and also news of a "give-away!" Tune in tomorrow,...

How lovely that your family has this! I love TRUE maple syrup and enjoyed seeing this process! (We are going to a Maple Syrup festival at a local state park next week where they will tap the trees, etc.)

I enjoyed this post so much, for the insight into the process, but even more I appreciate your family's history and tradition with it. Outstanding!

I've always been interested in the process, but since maples are not native to this area there's not much close. In the Missoula area (about 80 miles from here), maples have been brought in and planted and do very well. I have seen some of them being tapped for sap but I don't know how serious anyone is about doing it here.

oh wow - I love the insight as I adore maple syrup. yummm

What a truly wonderful post! Thank you so much for sharing this process with us.
I really miss maple trees. As you can imagine, we don't see many here in Alaska. Some people do make syrup from birch trees here, and it does taste pretty good. However, in my opinion, it does not quite compare to true maple syrup.

Oh Cedar, this is all so new to me. I never knew how they 'made' the maple syrup. Can you smell it when it is being 'harvested'??? This is so interesting, Cedar. I had no idea it was in your family. Does the 'true' maple syrup taste different from what we buy???

Thanks so much for your kind words,... I would like to taste the birch syrup. And yes, Betsy, you can smell it as it is boiling. There is nothing so sweet as the smell of a sugarhouse. All maple syrup that is labeled "Pure" should taste nearly the same, depending on if it is the Fancy grade or Medium or Dark. I prefer Medium or Dark. Fancy is too mild for me. If you meant the imitation stuff... there is no comparison. The main ingredient for that is corn syrup. More tomorrow!

Oh how I would love to come for a visit! Maine Maple Syrup Day is tomorrow, you can be sure DH and I will be making the rounds to our favorite "sugar shacks".

Very very neat. We went to a Maple Sugar operation in Vermont last fall on our leaf tour. I was fascinated by what we learned there. And even bought a book about the family and their traditions.

I have had one terrible time trying to get a post to you but will try once more. I used to own a home off Uncas Road in the Town of Eagle Bay. We cleard the land ourselves and hauled in all the lumber and roofing and built our own home away from our weekday home. This was also on a road that had to be maintained by the homeowners so that was always a work in progress. I can still remember some of the smashed fingers and tired bones and sleeping in the back of a pickup truck until we had walls and a roof.So many stories to tell. Hope you may be interested. Lilly

A giveaway! I hope it is some of the maple syrup :o)

Cody and I have mentioned trying to tap a few trees we have around our property. Recently, we met up with some friends who have experience in making maple syrup. Now, I know I can possible pick your brain,too!

This was very interesting. The pictures shocked me. I have never seen this process. Guess I missed the field trips with the kids. But wow! what an interesting look at your family's maple syrup production. Can't wait to see more. of course, the references to this tradition being handed down touches my heart! Our bees are arriving 4/13....more honey making for us.

I also learned about a new reverse osmosis technique which remove 70% of the water before boiling! Seems it is faster and uses less energy.

We have so many sugar maples just willing to give their blood!

I'm glad so many of you find this interesting. Yes, TourPro, we know about reverse osmosis. However that is the modern method and we choose to continue traditional methods. I think if we were doing it as a full business it certainly would be worth that big investment in new equipment.

I decided to fix pancakes this morning thanks to your inspiration!

Wonderful post. How great that you continue the family traditions. Great photographs and good information. Thanks

This is just amazing. I love the historicity of your family's business, and the wonderful heritage you have.

I am on my town's Historical Preservation Commission! I know how important it is to preserve such a treasure as what you have there!

Thank you for entering my name in your giveaway! Wow! I'm very honored.

I Love the history you included in the sharing of your 'Sugar House'...
We have a 'Sugar House' down the street from us and the steam covers the road sometimes (I love to breathe it in!!!)
Their using flexible plastic hosing now from tree to tree to bring the sap down from the mountain...Called convenience)...Lots of Maple Trees here also...
Love your Photo's...
Best To You...Marilyn

Oh, I want to come help!!!! Thanks for sharing this!

What a wonderful post. It's maple sugar time here too. I so enjoyed watching tradition being passed on and knowing some things in the family stay the same forever. It really made my heart feel good. It is a special time of year.

I love maple syrup and this is so great to see! Such a wonderful family tradition you have. Thank you for sharing this.

Cedar, I love your pictures and explanations of the process of maple syrup. The steam rising up through the opening made me think of the tobacco smoking process in the fall in our barns around TN. Thanks for the education.