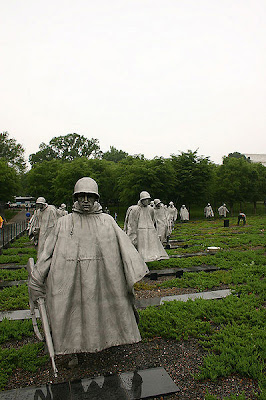 Back in 1918, in the 11th hour of the 11th day of the 11th month, an armistice was declared, ending WWI. President Woodrow Wilson immediately named the day Armistice Day. As history moved on and WWI was not the war to end all wars,... veterans returned from WWII, then Korea and VietNam and sadly on and on.... It is now a national holiday. I believe it is the only holiday that is never moved from its original date of 11/11.

This year I chose a Korean War Memorial photo to honor our Korean War veterans. I was in grade school at the time of the Korean "police action"... My cousin Tommy went to fight. I remember crying with worry.

Looking back I have known many other veterans,... John, Steve and Ivan who served in WWII, David and many others who served in VietNam. Then came the first Gulf War, my own son had just finished his years in the army, I worried that he'd be called back. He wasn't. And now this war involvement in Iraq and Afghanistan... It does not end. It is sad to say that hostilities have been present since cave man days and apparently will always be with us.

Amen! The Korean "conflict" is one of my earliest memories as I recall my parents listening to the radio to see if Congress had declared war. I also was very moved by the Korean Veterans Memorial.

Beautiful post today! We ALL do need to remember our Veterans today--and everyday. The do and have done so much to give us the freedom we enjoy.

I am with you. So many people I love and have loved have fought in various wars. Thank you for your poignant post. They are my heros too.

Saying thanks along with you.

This is definitely a day of reflection and gratefulness for all our veterans!

you always have such lovely post giving thanks for those who have placed their lives at stake for others.

Our son was in Desert Storm...I understand the worry and the fear.

My hats off and my hand is over my heart for all veterans, not only today but every day. Thank You Dear Souls. Thank you. Blessings to you and yours and to all those that are or have served or have loved ones that have or are presently serving. Blessings. Love and Light, Nina P

Amen, and beautiful post. Awesome photo. I always think how nice it would be if every single one of us got to know a Vet, talked a little bit. Especially here in the North Country, they're not in short supply. I'll have to remember to keep the Vets Club in my head for the next time I'm looking for a charity to help out,

When I visited the Korean Veteran's Memorial, I was so incredibly moved and I'm glad you chose it for your photo.
We owe so much to those who serve and I hope none of us ever forget.
Thank you so much for this post.