Normally the trip to Vermont from the Adirondacks is a pleasant drive via the Crown Point Bridge. On October 16th life as we know it in the North Country changed. The Champlain Bridge between Crown Point, NY and Chimney Point, VT was closed as it was considered unsafe. I applaud those who made that decision which they knew would be unpopular, I think those decision makers were heros for protecting lives. Maybe the bridge would never have collapsed, but ... what if it did? But I know what a huge inconvenience and expense now faces so many people.

Farmers, workers, those going for doctor appointments, and tourists are faced with either a rather long detour or the expense of a ferry ticket, which for a car and driver plus one adult passenger going round trip costs $24.25. Many people are employed in one state and live in the other state. People travel to Burlington, VT for surgery, dialysis, shopping for vehicles, and many other reasons. Lake Champlain Transportation has stepped up its ferry schedules, The Ticonderoga Ferry has put up floodlights so that it can operate after dark, and a new pedestrian ferry will begin Monday between Westport, NY and Basin Harbor, VT, as shown in this article in today's Plattsburgh Press Republican. A temporary bridge is also being explored. A sincere "thank you" to those that are working hard to solve this tough problem.

Today I drove a friend to Vermont to pick up a new car. Here's what that trip looked like...

Looking up at the pilot house on LCT's "Grand Isle" ferry. 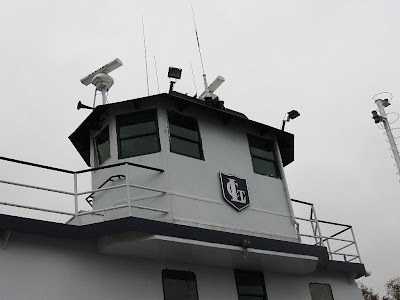 Waiting to load a car buying a ticket at the booth,... 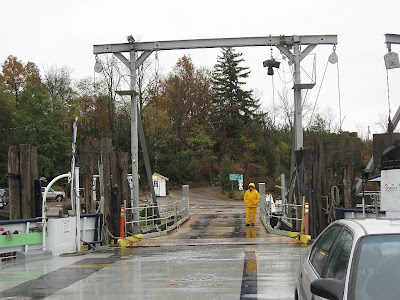 Underway across the lake, looking at NY to the west,... the Adirondack Mountains in the distance,... 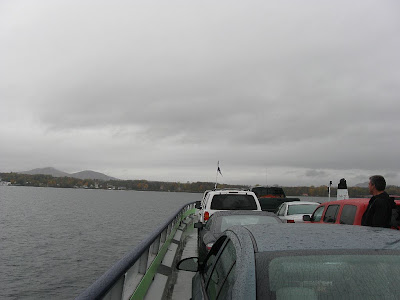 Looking down the lake toward the south,... the NY shoreline in the foreground. 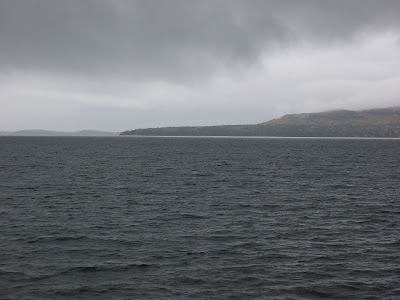 This couple is vacationing from Canada. We shared a quick visit while I was snapping the photos in the rain. I hope that the rest of your trip had better weather and that you arrived home safely! 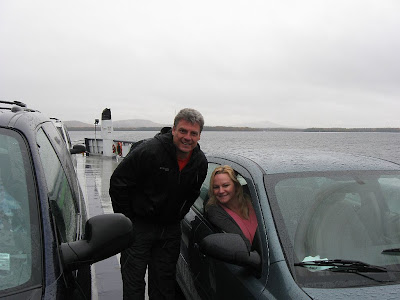 Cedar, I just made that trip from VT to NY and back across to Burlington the week of the 12th. It was very beautiful, and I thought of you as I photographed snow on the top of the mountain.

I'm glad they closed it for safety and hope they get it back up soon. Til then. Happy sailing (so to speak) Blessings to you and yours. Love and Light, Nina P

Oh, how DIFFICULT that must be for everyone!! But you're right - hate to see a collapse like that one several years ago. Can't remember where it was but the images are burned in my brain. So much of the USA infrastructure is OLD and needs repair. Lovely pics!

I can imagine the impact that would have on many people, but it is best to be safe. I would really enjoy the ferry ride, but not as part of a regular commute.

I'm sure it's very inconvient but it is a beautiful ride even in the rain. Thanks for the lift, I enjoyed it! Jean

I agree about being safe rather than sorry! When do they expect the bridge to be updated and completed?
P.S. Vermont is a place I've always wanted to visit! Sometimes when I'm at the bookstore, I'll pick up a Vermont magazine - such a beautiful place in the photos!

Mmm. Wondering if it will be repaired or replaced. What a pain. After the bridge collapse in Minneapolis a number of bridges have been declared unsafe here and closed.

How wonderful--your pictures brought back memories of traveling across the river on the Canby Ferry. I hear it is still running, though only at certain times of year.

My first date with my darling husband was to cross on that ferry one enchanged night.

HOpe they have it up and going soon.

In answer to questions,... both VT and NY have declared it a state of emergency that the bridge is closed. That will make it easier to get the process under way to get a temporary pontoon bridge of some sort in place while the real bridge is evaluated further. I have heard that the US Army is being consulted on the temporary bridge. Lots of rumors are flying,... who knows! Thousands of people on both sides of the lake are holding their breath waiting for more news. Thanks so much for your kind comments!

Oh wow Cedar, that's quite a bridge! No wonder people are upset but I agree with you, safety has to come first.

Looks like a nice trip though I imagine it would be much better on a sunny day. I can't imagine going across in the dead of winter!

Hi Cedar, I'm trying to catch up on blogs. It may take me a long time... ha

Love seeing your ferry ride... The Adirondacks in the background are gorgeous.

I've been through some long bridge going into Vermont before ---but we weren't in New York... Can't remember the name of it. I need to find those old pictures.

Glad to be home!!!
Hugs,
Betsy

I have been fascinated by this developing story. It sure has impacted a lot of people. I am glad they closed the bridge for safety, but it's worrying that it was closed so suddenly? Seems like they weren't really prepared for this - how was it not noticed that it was falling into such dangerous disrepair? I really empathize with everyone affected by this, especially the people who used the bridge to go to work, oy!

Nice post Cedar...your views and vistas on the ferry are much like ours on the Kwuna ferry. Your price is about the same as ours and the trip is twenty minutes. At the moment the Kwuna is off for a refit in Victoria so we have a barge and tug where you have to back on to be able to drive off! I used to be frustrated by the ferry when I was living in Sandspit and working in Queen Charlotte however outside of the cost I found it a peaceful respite at the beginning and end of my day.
Take care and enjoy the ride!
Smiles

Cedar being an islander I can understand what you are dealing with. Many moons ago we took the ferry across and it was just beautiful. I hope thinks work out pretty quickly for you all, what will happen when winter sets in?

An occasional ferry ride is novel and fun but I don't know that I would want to do it on a regular basis. I am reminded of the time we took a ferry to a Maine Island to see a lighthouse. On the return trip we waited a few extra minutes for an ambulance to come racing to the ferry where it then traveled at the same speed as the rest of us to mainland.

It's certainly an inconvenience for many but if it saves lives, that's what matters.
The ferry is always fun and the shots were beautiful. That's what the weather has been like here every day in the Northeast Kingdom, shades of gray.

This is so interesting Cedar. Thanks for taking the time to explain all the details. Did you happen to see the news that the Bay Bridge has been closed for several days in SF? Glad I'm not working in that part of the country any more!

Oh, such great memories - tons of 'em. Thanks for the pics. We've done the Grand Isle crossing more times that I can count, even taking a little bus full of actors over to Burlington twice when we toured a show up here. Hope they get that bridge fixed soon! I understand all the protest, but I guess I also don't want people on a dangerous bridge.

Thanks for saying hello. I look forward to visiting your site as well. The ferry post and photos are great. It's such a big story in the Champlain Valley (on both sides of the "pond"), and it affects so many people. It's true -- it must have been a tough call to close the bridge, but it was definitely the right decision.
Keep in touch.
-Erica

Thanks for the lovely ride! We have a ferry that crosses our small Chautauqua Lake. I haven't been on it in years. Sounds like a great adventure for Jerzie next summer.