This high school class ring is dated 1922. It is from the same K-12 school where my grandchildren attend,... and the ring belonged to my father,... their great-grandfather! 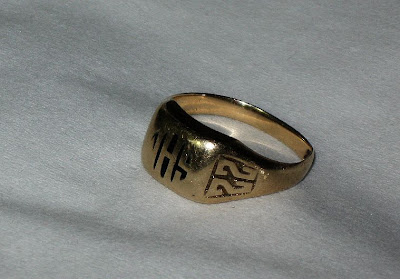 Yesterday on Red Pine Mountain Mountain Woman invited bloggers to write something about special men in our lives. So, I have been thinking about this post for some time,... a post about my own father!

Below you see my father, on the left, sometime in the early 1950s working for the local power company. As you can see, it was when times were simpler. Note the wooden poles and cross arms. 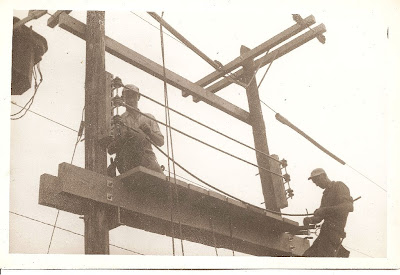 The power company was sold and consolidated with a large electric company. My father took his ability to climb poles and work on the wires to the local telephone company. Here again he's shown at the left in this photo. This was taken around 1957. 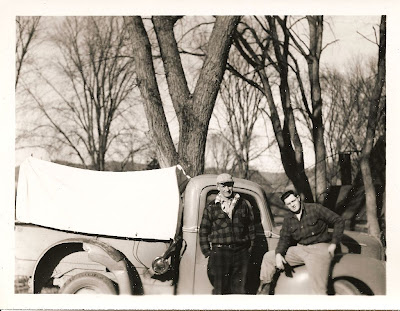 After he began to get a bit older and decided that he should no longer be climbing poles he went on to drive a school bus and then served as a local town highway superintendent. For a man who only graduated from high school he did well in his life and provided a good life for my mother and me. 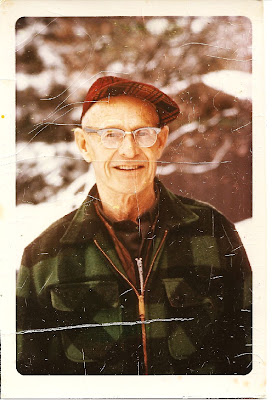 This photo above is my favorite one of all the ones I have of my father. It shows him as I will always remember him. A man who loved his rural community, his Adirondacks, in his hunting jacket and cap... and his gentle smile. He and my mother had built a log cabin, and he was known as a woodsman. There was a saying years ago when he was still alive,... "you could drop him on any mountain top in the Adirondacks and he'd walk out in three days,... he could have done it in two days but he took the extra time just for the enjoyment of it!"

It's with great pride that I dedicate this post to my "daddy"... I will always love you, and I miss you terribly. You were solid gold.

YOu had an amazing and talented father! I love his "adirondack" outfit! That look is so timeless!

What a neat post, Cedar... Your father looked like a hard-working, wonderful man. My Daddy was the same way. The only problem with Dad was that he worked all of his life and they made him retire when he was 75. He had no hobbies --and died at age 79... Kinda sad! He just didn't know what to do with his life.

what a beautiful tribute....I loved reading about your dad.

This brought tears to my eyes! Love the saying about the mountain top too. no wonder you are a nature lover- the apple doesnt fall far...

I was very touched by your post, Cedar. I reminded me so much of my own father. There was something so special about their generation and the similarities transcended the distance nearly from coast to coast. Somehow we have gotten away from the values of men like that and life has become much harder and less pleasant as a result.

It's wonderful though to be able to look back at that kind of heritage and remember what men like that were like!

What a beautiful tribute to your Father. I loved the photos of him working on the phone poles but I especially liked the last picture of him. His smiling, kind face said it all.
I enjoyed your story and I can see why you admire your Father. What a special man.

Daughters and fathers have a very special bond. Your Father would be very proud reading this tribute dedicated to him.

What a wonderful tribute to your father. It makes me think of my own wonderful dad.

I think that our real celebrities, the people who were are are actually the most important in our country are folks like your father - people who spent their lives truly involved in and bettering their communities. Great post!

The Retired One said...

Look at him with his cute shirt and face. I love the stories of his determination and life.
What a nice blog post about him!

Cedar, such a beautiful tribute to your "daddy". Thank you for sharing it. Smiles and blessings

How beautiful Cedar. Your dad must have been very special as you describe him in such a loving way. I know you must feel lucky to have such a great man to call Daddy. I can see why you like that old photo, its a good one!

What a wonderful dedication. I was truly touched by this and could not help but shed a few tears for this amazing man who looked out for his family by working so very hard.... I know he is proud of you today!

Hugs to you, my friend♥

such a special post....and can I just say I love your banner photo !!!

What a lovely tribute to your father, Cedar. He looked like a truly wonderful man.
My family lived in upstate New York many, many years ago, and I have some very similar photos of my grandfather and father in their hunting jackets and caps.
Your post brought back a flood of memories, and I thank you very much for that. :)

As I have been sitting the hospital room with my mother the past few days, our talks have often drifted to memories of my father.

What a wonderful tribute to your Dad... I just wish I had known him... he reminds me of my Dad in so many ways. He and your Mom ... and of course you.. had a great life together. Hang on to all those wonderful memories!!!

Oh I LOVE those pictures! And your dad sounds like one of those wonderful people many of us just DREAM about having for a dad. So glad you had him and he had YOU!

Laughed over the description of getting out of the Adirondacks. Grizzly would be right there with him. Thanks for sharing this story with us!

What a wonderful blog!!!

Wow, Cedar! I can't tell you how much I enjoyed your blog today.

Hey, thanks for sharing!