The skies threatened rain and finally delivered rain as the last band was closing Saturday night. People ducked into the pavillion, and laughed, it was still a happy time. The scene was the 6th Annual Upper Hudson Bluegrass Festival in North Creek, NY. Here the crowd gathers in the pavillion facing the stage at the Ski Bowl Park. 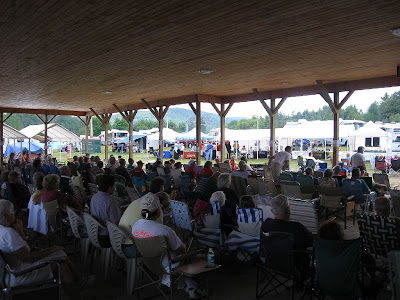 The Town of Johnsburg, home of Gore Mountain Ski Area donates the use of the grounds. Thank you Johnsburg! 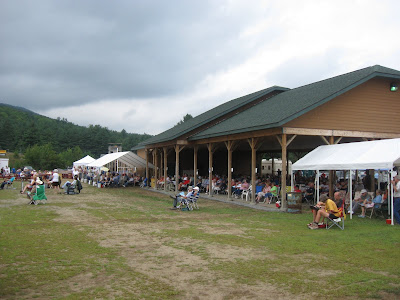 For me, this particular festival was all about traditional bluegrass music...the pioneers, the people that have been entertaining for decades. Smokey Geene, and his Martin guitar which he named "Ben A. Martin" are always a favorite. Smokey, now 79, has been performing for more than 50 years. 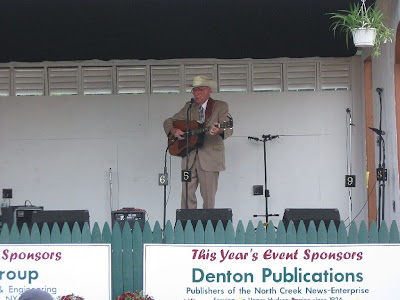 Traditional music continued with Vern Young, who is now 85 years old. This gentle giant's voice and guitar picking is still strong. I talked with Vern and he's a gracious and most interesting person. And,...he's booked to be back in 2010! 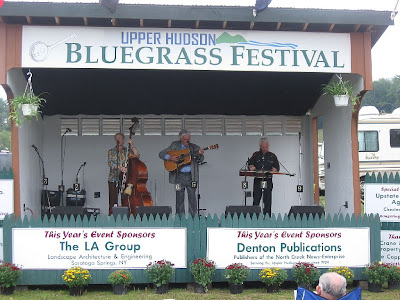 White Mountain Bluegrass continued the traditional music with several sets over the three day festival. I spent some time visiting with Mac and Hazel as they sat in their individual band tent near the stage. I felt honored to receive a hug from each of them as I headed back to the pavillion. They are included in a permanent display honoring Pioneers of Bluegrass at the International Bluegrass Museum in Owensboro KY. 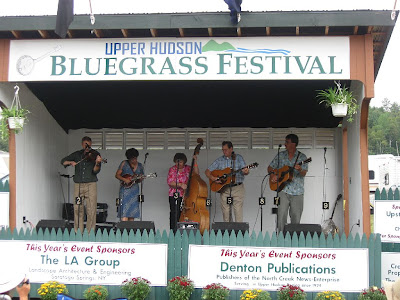 Here Junior Barber of Beartracks visits with Vern Young. Talk about a "meeting of bluegrass minds!" It doesn't get much better than this! 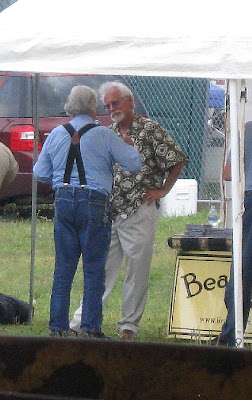 Watch for Beartracks at the Peru Community Church on November 13th at 7:30 p.m. Junior Barber, his cousins Julie Venne-Hogan and Tom Venne will be performing their usual high energy music.

If you have never attended a bluegrass festival give it a try. Bring your camper, your tent, or just bring a folding chair and come for a day. You will leave steeped in traditonal music and warmed by the friendship of the "bluegrass family."

That is just so neat, Cedar... I love Bluegrass --and I love camping... You have really had a marvelous summer, haven't you???? Thanks for taking us along with you for some of it.
Hugs,
Betsy

I thought of you today as I read the new O magazine. There is a tiny article about the "belles of bluegrass" - I listened to Sarah Jarosz and liked what I heard.

I sure wish I could have been to that one! How nice of the town to donate the use of those fine grounds!

I haven't a clue really what Bluegrass music is... I think what I will do is download some off the internet to give it a listen. It sounds like fun and everyone seems to be having such a good time!!

What a fantastic summer you've had, Cedar, full of rich music and experiences. I'd be lyin' if I told you I didn't wish I was right along with you. You canNOT help but get in the right frame of mind listening to bluegrass. I think I'll go flip on my bluegrass channel. All bluegrass, all the time!

It sure sounds like you had a wonderful time! Good for you.

You have had such a wonderful summer, filled with great music, friends, and fun. I can't wait to see what fall is going to bring!

And most importantly, a good time was had by all!

Wish I'd had time to go... NCPR promoted it so hard, I was sure it would be the event of the year! Glad to know you got to go and it was great.

I loved the photos and your post. Bluegrass music is so fantastic.

My hands were clapping and my feet stomping. I miss those times with my family. All are gone now, but when I was a child every evening was full of boot stomping music as we sat on the porch!

Wow, you sure go to some wonderful music events! This sounds like another wonderful one!

This looks like such a fun trip! I would love to listen to music while enjoying the outdoors!

We ended up hearing a bluegrass group quite by accident while I was on a "date" with my husband while on vacation in Chincoteague, VA and we enjoyed it so much we bought two of their CDs. While we do have two country music stations here where I live (about 75 mi north of NYC), we're not "north enough" to hear much of any bluegrass here, but once we get our place built in the Adirondacks, we will surely take the opportunities to enjoy some! Glad you are having such a wonderful summer - hopefully the memories of all your fun times will hold you over the loooong cold winter. :-D

I recently came accross your blog and have been reading along. I thought I would leave my first comment. I dont know what to say except that I have enjoyed reading. Nice blog. I will keep visiting this blog very often.